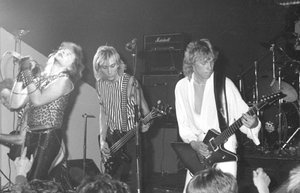 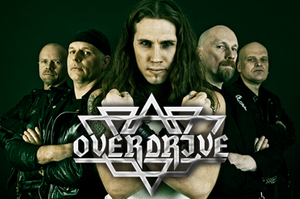 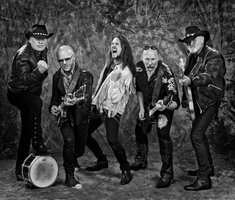 Overdrive was ormed in August 1980 when Paradize guitarist Janne joined forces with Ocean drummer Kenta to form a “real” heavy metal band. They were accompanied by bassist Kenth Eriksson and singer Pelle Thuressoin of Paradize and guitarist Kjell Jacobsson of Ocean. A first two track demo (Overdrive/20th Century) was recorded in 1980, and later released as a picture disc 7”. In 1981 the band recorded 7 songs, where two were released on the “Rockslaget” compilation and the other five as the band’s debut MLP “Reflexions”. The MLP lead to a deal with Planet Records and in 1983 the debut album “Metal Attack” was released. It was followed by “Swords And Axes” in 1984 and the band did lots of live shows together with bands like Mercyful Fate, Pretty Maids, EF Band, Silver Mountain, Syron Vanes etc.

In 1985 the band switched bass player from Kenth to Zoltan Djember and some new demos were recorded. Problems with the label and the loss of singer Pelle Thuresson (who became a bass player instead) however put a halt to the band. Janne and Pelle formed a new band called Overheat, while Kenta and Kjell turned up in bands like Pride and E-Type. In 1993, Janne, Kenta and Pelle (now on bass) drafted singer/guitarist Jörgen Miller and formed a new incarnation of Overdrive. The band recorded a 4-track demo entitled “Back To Basics”, but nothing more came out of it and the band folded around. A re-union took place in 1997. At the time Janne and Kjell was in the band Locomotive Breath while Pelle and Kenta played in Crooeyed Mary. A live recording of this show and some older gigs was released as “Mission Of Destruction – Live” in 2001.

In 2003 the band reformed once more for what was supposed to be another one-off event at the Rockslaget festival. However, now the band was approached by German metal festival Headbanger’s Open Air for another show. Pelle decided he wouldn’t not be part of it as he was now a bass player, so the band drafted formed Unchained singer Per “PerilOz” Karlsson (now Lengstedt). With a new singer and new energy the band decided to re-record a couple old tracks plus one that was never finished before the break-up. It was released by the band as the MCD “Resurrected” in 2006, in 500 copies. A show at the Sweden Rock Festival in 2007 and the MCD lead to a deal with Lion Music and the return album “Let The Metal Do The Talking” was released in 2008. The album featured both new written material and songs written, but never finished, back in 1985.

In 2010 the band started working on a new album, which saw the light of day in 2011, entitled “Angelmaker”. Later the same year some left over tracks from this recording session was released as the limited edition LP only release “The Angelmaker’s Daughter”. In 2013 the band was offered to do a short three gig tour in Japan and the show in Osaka was also recorded for a DVD.

Shows were played in Sweden, Denmark and Belgium. Records were re-issued and old recordings dug up!

In 2019 the band decided 2020, the 40 year anniversary of the band, will be the band's final year! Unfortunately original singer, later bassist Pelle Thuresson has other engagements so the band has been reinforced with bass player Johnny Granström, who was 1/3 of Ocean back in the 70s together with Kenta and Kjell.

In 2022 things had finally got back to some type of "normal" and Overdrive could finally play their 40 (+2) anniversary shows in venues like Karosserifabrikken (Elsinore) and The Abyss (Gothenburg). The band also played Sweden Rock festival (the show was filmed and recorded) and the final show took place in the band's hometown Karlshamn on July 21 at the Östersjö festival.

The story has now come to an end.