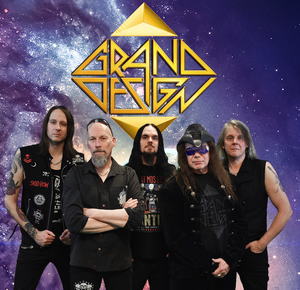 Grand Design was formed in 2006 by singer/producer Pelle Saether, and the band’s first 1st album “Time Elevation” was released by AOR Heaven in October 2009.  The album featured guest spots from guitarists Janne Stark (who also came up with the band name, the logo and the title). Two years later, it was time for Grand Design’s second album – “Idolizer”, where Janne played a guest solo on the track “Fallen Hero” (a cover of Vixen, that unfortunately didn’t land on the album).

In 2012 the line-up saw a change in line-up with singer Pelle Saether and guitarist Dennis Vestman, now flanked by guitarist Janne Stark (Constancia, Overdrive etc), bassist Mats Vassfjord (Chris Laney Band, Scaar) and drummer Peter Hermansson (Talisman, John Norum, 220 Volt). The band continued playing shows and festivals, building a solid following. In 2011 Janne was also brought in to do a guest solo on a track for the compilation “Rock For Japan”.

Early 2013 the band recorded two new songs, featuring guest singer Susie Päivärinta (of Lili & Susie), of which the song “Baby It’s You” (Promises cover) was released as a digital only single and video in June 2013. The band also welcomed new drummer Magnus Ulfstedt (Eclipse, Jimi Jamison, Talisman, Lion’s Share etc), who made his debut in the video. The band also performed at festivals such as Skogsröjet and Rock Out Wild.

Early 2014 Grand Design released their third album, Thrill Of The Night. The Japanese version also contained “Baby, It’s You” and the aforementioned “Fallen Hero”. In 2015 Magnus left the band to concentrate on playing bass in Eclipse. The band borrowed Coldspell drummer Perra Karlsson for various shows. In 2016 the band re-issued the debut album “Time Elevation”. Because of problems with the rights to the artwork etc, the album was reissued by the band in a limited edition, with new artwork and also entitled “Time Elevation (Re-Elevated)”.

In 2017 bass player Mats Vassfjord left the band and was soon replaced by Stefan Westerlund (Rocket Love). The band started working on the new album "Viva La Paradis" (tbr) and the drums on the album were played by Perra. After the album was finished, the band finally drafted drummer Joakim Jonsson (Axenstar, Psychopunch).

In 2019 the band continued playing show. However in June Janne made the decision to leave the band, but promised to fulfill the shows that were already booked. On August 3 he made the last show with the band at the fantastic Brientzersee Festival in Brienz, Switzerland. On Monday August 5, Janne made the official statement he was leaving the band. Despite leaving the band, Janne was also involved in the next album, "V", but only working with artwork layout and vinyl mastering.