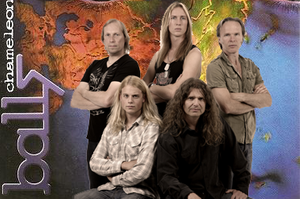 The band was formed in 2007, initially as an off-shoot to singer Björn Lodin’s band Baltimoore. Björn and Janne started writing music and since Janne was at the time also collaborating with singer/guitarist Mikael Nord Andersson (Roxette, Scorpions etc), he was also asked to join the band.

The line-up was completed by bassist Björn Lundkvist and drummer Robban Bäck (Black Ladies). The member’s initials: Bäck, Andersson, Lundkvist, Lodin and Stark made up the name BALLS. Because of various issues regarding time and economics the band only lasted until the album was finished and released.

Björn has later recorded with Baltimoore and H.A.R.D, Mikael Nord Andersson in Scorpions (as producer, composer and session musician), Robban in Eclipse, Sabaton and Mustasch.